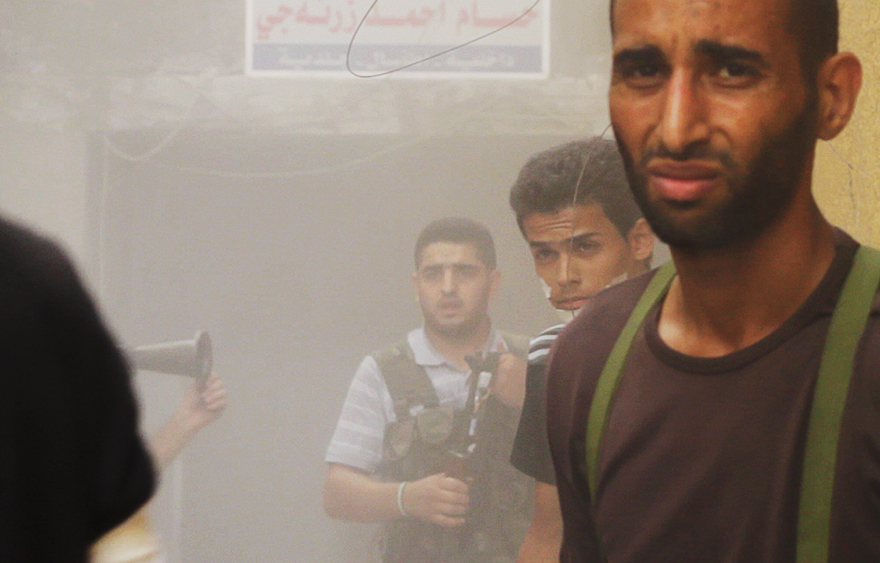 the footage of this short film was made in aleppo, syria, in september 2012. it took me till now, october 2015, to finally finish a picture of everyday life of a fsa brigade.

being embedded in a war situation, one is completely reliant on the chosen group, even more, when one joins the shelter, that is a permanent target of shells and bombs, and accompanies the free syrian soldiers to front line. what i found however, were men and boys between fighting and household, between gaining and loosing, joking and crying, between hope and death.

i was reluctant to show an idealized picture of a fighting force as being the nice guys from next door. as soldiers they are killing. being an atheist myself, i don’t agree with many religiously shaped views.

over the last years, not only the conflict itself and its consequences are becoming more and more disastrous. also the situation in aleppo is as dreadful as never before. so day by day, the number of now killed people, but i’ve met back then in syria, is growing. people full of hope and determinedness, risking their life every day for the one objective: a free syria, for all people.

on the other side, the reception of the fsa, the armed opposition in syria, which is fighting assad, his regime, his army and those of his allies, is shifting again. europe always neglected to state a strong solidarity with people in syria, who are asking for their human and civil rights, being shot at in peaceful demonstrations, tortured in state prisons. now, that europe starts to feel a glimpse of war consequences, its governments react stingy, frightened and brutal, trying to close borders, denying respect, empathy and human rights. instead of strengthening the opposition in the conflict, europe can think of nothing better than, most likely, accepting assad in a political solution.

with this short film i want to pay respect to people with dignity and an honest and firm commitment to fight oppression and injustice. i found them within this group of the fsa.

the facts: between march 2011, the beginning of the syrian revolution, and march 2015, 220.000 people were killed according to the official numbers of the united nations. around 11,6 millions are fleeing war, 7,6 millions of them being displaced within syria, 4 millions left the country. these are only the official numbers, the most conservative estimation. in fact, the united nations stopped counting in 2013.